Excerpt from "The Hype Magazine" 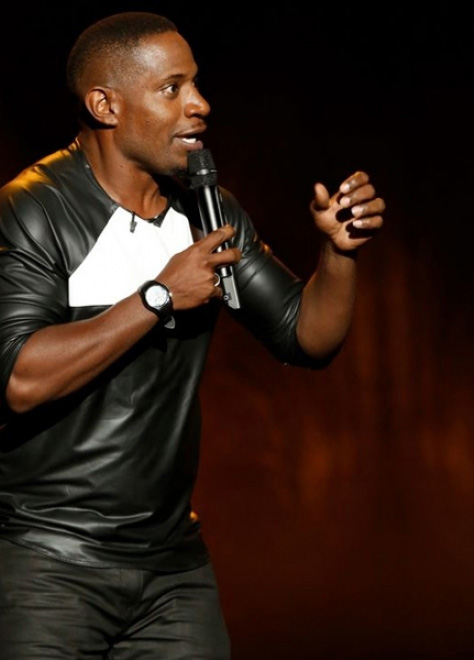 You were recently crowned victor on season eight of Last Comic Standing -- How does that make you feel?

It feels AWESOME!! I said that on the show when I won the Ellen (DeGeneres Talk Show) Challenge.

That being said, overall how was that entire experience for you?

It was a great experience. I learned a lot from the different mentors we had, especially Wanda Sykes, the judges; J.B. Smoove, Howie Mandel, Jay Leno and working comedy discipline such as sketch improv, as well as becoming a better writer.

What were not only some of your favorite things, but also your least favorite things as well, about being on a televised competition show of this magnitude?

Favorite things: I enjoyed the challenges, they were cool.

Least: Having to go into the booth after the challenge and say, “I’m funnier than..."

Do you have any funny stories and/or anecdotes that you can share which took place during the filming of Last Comic Standing?

J.B. Smoove was always a riot each day; crazy energy, very positive brother and would come in before taping and just get us fired up with these crazy pep talks, and...I didn’t know Roseanne (Barr) could actually dance. She got pretty good rhythm; she would dance in between takes.

Reflecting, when did you first become interest in comedy? Were you just a naturally "funny kid?"

I’ve always been interested in comedy, I just didn’t know how you go about doing it for a living. I remember Def Comedy Jam, Uptown Comedy (Corner) in New York and I would watch The 'A' List, which was a show that came on VH-1. I was a fan of Richard Lewis. I believe that I am a naturally funny person; I’ve always been able to make people laugh.

Do you remember your very first joke that actually made people genuinely laugh?

So growing up, who were some of your biggest comedic influences?

How would you classify the style of comedy that you create and perform?

I’m a classic storyteller. I like to think of it as “conversational comedy,” you’ll be talking about it the next day.

Where did the moniker Rod Man originally derive from?

I didn't want my family to know I was doing comedy before I was ready to be seen, so I remember there were a lot of "Mans" signing up for open-mic -- Zoo Man, G-Man, Face Man, T-Man -- and at the time I was a fan of Dennis Rodman “The Worm,” not the North Korea Dennis, and I had a (Chicago) Bulls and a (San Antonio) Spurs jersey that had Rodman on the back and that was the beginning of Rod Man, not which by the way people mess up the spelling of it all the time.

At what point exactly did you opt to pursue being a comedian professionally?

I didn’t want to do anything else once I started doing open-mic.

Longevity, what do you attribute yours to? And, what will continue to sustain you in the world of entertainment?

Hard-work, staying current, working on my craft, adapting and willingness to grow as a performer.

You also have appeared on the silver screen -- Is acting also something that's on your radar? Are you really looking to pursue this more so?

Stand- up is the tree, and whatever grows from this tree I’m open to pursue. I would like to (share) my funny in a lot of different places.

Do you have any other outside/additional aspirations, maybe even completely away from entertainment?

To date, what has been your biggest career moment, thus far anyway?

Looking ahead, say five or even ten years from now, where do you see yourself?

With a successful TV sitcom and touring all over the world.

As for the immediate future, what's next for Rod Man?

Going around the country and being funny, developing my show; building Team Rod Man basically.